No Nerf guns. Ever.

While my childhood was devoid of viewings of A Christmas Story, apparently the universal law of toy guns held true; that ownership of one ensured the owners loss of an eye. And with that, a spark lit an ember that would grow into a problematic firestorm as soon as I became a homeowner, a decade and a half later.

My name is Marc Alan Fishman. To date, I own 61 Nerf Guns. There’s no sign I’m stopping anytime soon either. Nerf guns are relatively inexpensive. They make amazing props in comic books. They can be modified to shoot harder — which allows collecting to become something more akin to a hobby. As such, I consume a large amount of content on the internet related to the flinging of foam. Be it reviewing of existing products, sneak previews of guns to come, or viewing tutorials on modification… nary a week passes without me taking in a few minutes of dart play.

Given the time of the year, I thought it might be apropos to offer parents, kids, and everyone in between my recommendations for fun purchases of a holiday nature. Take into account: I always recommend parents to research the toys they buy — be they for their wee ones, or themselves. These are just my opinions. Stay safe. Have fun. Let’s get into it:

The best Nerf gun to buy anyone, anytime, for anything: the Nerf Stryfe

The Nerf Stryfe is a semi-automatic flywheel blaster that has become the go to weapon in nearly every decent Nerfer’s armory. Toss in 4 AA batteries, rev the teeny motor, pull the trigger, and launch dart after dart at friends, family, and pets alike. The Stryfe is — all things considered — the best bang for the buck in the marketplace. While it retails normally for $30, honestly you can find it on sale more often for $20. I myself nabbed a second Stryfe (shh) on Cyber Monday for only $16. The blaster has attachment points allowing role-playing soldiers the opportunity to outfit their primary weapon with any number of barrels and stocks. And with tactical rails on the top and bottom, anyone looking to customize has ample room to do it. And beyond that, the Stryfe is also the go to blaster for modification. When you want to take the leap into electronic dart hackery… this is the keystone to that dark and fun place. How do I know? Because I’ve not done it yet, and that is why I got myself a second one, for when I inevitably mess up.

The best Nerf gun to buy when you don’t want to invest in batteries: the Nerf Alpha Trooper or Nerf Rival Kronos

Springers in Nerf-speak are blasters powered solely by coiled springs that force a plunger and pocket of air to propel a given projectile — be it the Alpha Trooper’s darts, or the Kronos’ balls. The Alpha Trooper is typically under $30 retail, and is currently under the shell name “AccuStrike  AccuTrooper”. No, seriously, it is. The blaster comes with an awesome 25 round drum, allowing for plenty of time popping shots off before reloading. It also has a barrel lug and stock attachment point, allowing for customization.

For those a bit older, Nerf’s Rival line has dropped into the marketplace delivering higher powered shots of still-very-safe-and-squishy foam balls. The Rival Kronos is the low-cost leader in the ball-busting line, typically landing under $15 on store shelves. The Kronos has an internal magazine that holds 5 balls, and a handle that is honestly built for more adult hands. It’s intimidating, accurate, and makes you feel like Hellboy when you brandish it. So. Get 2.

The Nerf gun to buy yourself, not tell your children, and then unleash it when they deserve to be taught a lesson by foam: The Nerf Rival Perses

OK, parents, send the kids out of the room. They gone? Good. The Perses is expensive. I know. $100 unless you get lucky, but trust me… it’s worth it. While the provided hopper only holds 50 balls, once you rev it up and fire? You won’t care. If you’re like me, and don’t mind selling a few extra freelance commissions to earn some funny money? You can dip your toe into the Nerf aftermarket (yes, seriously, it exists) and buy an expanded hopper than increases your internal capacity to over 150 balls. The Perses uses a hopper-and-conveyor belt to roll rounds from the feeder into the flywheels at somewhere around 7-10 balls a second. The trigger is electronic, so, one polite tap burst fires 3-5 balls at incredibly mean speeds. It’s satisfying like you wouldn’t believe. And did I mention this blaster does come with a rechargeable battery? So when your spouse is making that face, you can at least declare you were being conscious of not needing to buy more batteries! Then, spray said spouse with 40-50 squishy rounds before fleeing in terror. #WorthIt

And lastly… you want a Nerf Gun that will turn heads: the Nerf Zombie Strike Nailbiter 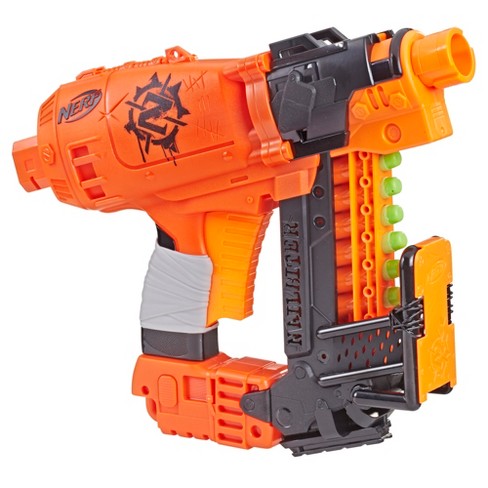 The Nerf Zombie Strike line is hilarious. Full stop. Meant to be the “Nerf Arsenal in a universe where the zombie horde is taking over”, the blasters all share the aesthetic of a post-apocalyptic world where weapons are built from scrap, and meant to be last lines of defense. While this leads to some hilariously ugly and weird weapons, none are greater than the Nailbiter. Resembling a nailgun, this 8-round internal magazine springer deals the hits with one of my favorite firing gimmicks; the blaster squeezes off shot-after-shot with the pull of the trigger. No priming necessary! No batteries necessary! While the blaster won’t fling foam as far as other blasters, what it lacks in performance, it makes up with personality. Pair it with the “Zoom & Doom” accessory pack, and you add 8 rounds of on-board dart storage, and a grizzly barrel extender (that doesn’t make the blaster better, but it increases style points something fierce!) that no one will forget on the battlefield. And since it’s a one-hander? Buy two, and go all zombie-slaying John Wick on the kiddos. You’re welcome.

Looks Like We Talk About Marvel & DC A Lot!